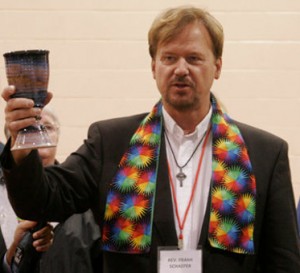 When my son Tim was in high school, I received a phone call one day from a woman in the community. She wanted to remain anonymous but she said it was very urgent. She said, “I know that your son is struggling with his sexual identity and he is considering taking his own life.” I was in disbelief.  My wife and I sat down with him and asked him, and he said yes, it was true, he was considering suicide.  And what he started to share with us was heartrending.

Tim told us that he had cried himself to sleep many nights, praying to God to make him different, to make him “normal.” And he shared with us that it all started when he went with me to an annual conference meeting. There was a debate on the floor about homosexuality and that was when he learned for the very first time that his own church, the only faith he knew, was telling him that he was a freak. That there was no place for him in the church he grew up in. Tim had always been a very good PK:  he had been active in the youth group, he preached on youth Sunday and he had the largest contemporary Christian music collection of any person that I knew. Faith was very important to him. And to hear that message from his own church was devastating.

When we heard his story, we were devastated, too. We could not hold back our tears and we just hugged him and cried and held him for a very, very long time. And then we told him how much we loved him and how that would never change. We started to affirm him and we said things to him like, you are made in the image of God, God made you this way and you should be proud of who you are. It was a real struggle for him because the spiritual violence inflicted on him by his own church had cut so very deep. But he did get there, he did come to accept himself for who God created him to be – a beautiful gay man.

Years later when he met his fiancé and they started dating and became serious after a couple of years, he called me. He broke the news, “Dad, I got engaged to Bobby,” and that was good news indeed. Then he proceeded to ask me, “Dad, would you do my wedding?” I said, “Absolutely!” How could I possibly have done anything else?

When the day of the wedding came, I was a little nervous. It was my first gay wedding. I had never even attended a same-sex ceremony before, let alone officiated one. In preparation, I had done some research to figure out how to adjust the liturgy and designed a service that was right for this occasion.

It was a beautiful affair! It was deeply meaningful for me personally, but it was equally meaningful to all those who were there. Gathered family and friends were proud to be there to support Tim and Bobby, and overjoyed that they had found each other. The applause was bigger and longer than any I’ve heard at a heterosexual wedding, an affirmation that “such love is from no other source than from God,” as I said in my sermon – no matter what anyone, or any church, says.

What I remember most about that day was the reaction of Bobby’s family, a mix of Italian Roman Catholics and Orthodox Greeks. So many of them came up to me afterwards to thank me. They had assumed that Bobby might someday be able to marry and have a service performed by a justice of the peace, but they never dreamed that a religious wedding, officiated by a clergyperson, might to possible. That is was meant the world to them, and they were so grateful.

As everyone knows, I was eventually brought up on official charges for performing this wedding, tried in a church trial, convicted and defrocked. My calendar, however, has never been as full of preaching engagements as it has in the five months since that sentence. God’s message, it seems, has been “I’m going to frock you right back up.”

If I had it to do over, I would make the same decision again. How could I possibly do otherwise?

Frank Schaefer is a former elder in the Eastern Pennsylvania Annual Conference and is now speaking and preaching on behalf of the human rights of LGBTQ people. He will be MIND’s speaker at this year’s annual conference lunch, June 6, 2014.

We Did is a project of Methodists in New Directions (MIND) dedicated to making visible our ministries to LGBTQ people and encouraging others in the UMC to transcend the institutional requirement to discriminate and make their ministries visible, too. It is part of the Biblical Obedience movement sweeping across the United Methodist Church. You can read all the We Did stories here.  We invite you to submit your own story to We Did.