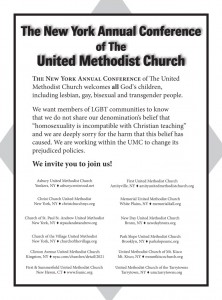 In 2010, MIND undertook a project to bring the words of welcome off the pages of NYAC resolutions and into the lives of LGBT people. For over three decades, members of the New York Annual Conference have voted year in and year out to affirm the humanity and sacred worth of LGBT people and oppose the UMC’s prejudice and discrimination against them. But heretofore, no one had reached out to LGBT communities – which are constantly the target of Christian homophobia and hate speech, from evangelicals, United Methodists and others – and told them that NYAC dissents from official church bigotry.

MIND introduced a resolution at the 2010 annual conference that would have required the conference to take out advertisements in LGBT publications doing just that, letting LGBT people know we stand in solidarity with them and in opposition to our denomination’s policies of exclusion. The resolution was passed in the legislative section, but ruled out of order on the plenary floor by Bishop Park. MIND challenged that ruling, making the point that all the resolution sought to do was tell LGBT people what we had already resolved on their behalf. The case was reviewed by the Judicial Council, which disappointingly refused to intervene. However, their procedural ruling left us free to reintroduce the resolution the following year.

Which is precisely what we did. At the 2011 annual conference, MIND introduced a revised version of the resolution, which added more detail and addressed the bishop’s objection, and it passed.

The resolution set up an implementation team, composed of a representative from the bishop’s office, one from the Conference Board or Church and Society and one from MIND, and the team researched possible ad venues in the fall and spring. They decided to place the ads mainly in annual Gay Pride guides that cover the entire geographic area of the conference. The pride guides, as well as one LGBT newsletter where the ad is also running, support and promote the work of LGBT community centers and thus this seemed a particularly appropriate and useful way for NYAC to live out its  commitment to stand visibly in solidarity with a marginalized community.

Meanwhile, because the UMC Book of Discipline’s prejudice against gays and lesbians includes a prohibition against the use of annual conference funds to “promote the acceptance of homosexuality,” funding for the ads was completely separate from their implementation. The resolution specified that the ads be “paid for through voluntary contributions to be received by MIND.”  We conducted a fundraising drive for this purpose in November and December 2011 and the response from hundreds of MIND members and supporters was gratifying and generous. We raised $3,800, enough to allow us to place full-page ads in all the venues.

We want members of LGBT communities to know that we do not share our denomination’s belief that “homosexuality is incompatible with Christian teaching” and we are deeply sorry for the harm that this belief has caused. We are working within the UMC to change its prejudiced policies.

We invite you to join us!

2011 Ministry to the Marginalized resolution

PDF copy of the advertisement and the resolution

2011 background document, “Why the conference can and should pass the Ministry to the Marginalized resolution”