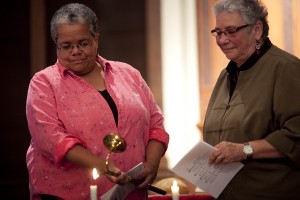 We do! Methodists Living Marriage Equality is a bold and creative idea to make marriage equality a lived reality for gay and lesbian United Methodists in the New York Annual Conference. But it is not a new idea, nor is it uniquely radical. It follows and builds on earlier efforts,  even as it has become the catalyst for a new pastoral movement throughout the denomination. All over the UMC a movement has been gathering steam to change the church by changing what church people do. Specifically, by deciding that they will stop discriminating against LGBT people by “supporting and honoring same-gender marriages in the same way that we support and honor other marriages,” as Foundry UMC  put it. United Methodists are deciding to end discrimination now, rather than waiting for the day that the church’s rule book, the Book of Discipline, finally changes.

Foundry, a reconciling congregation in Washington, DC, decided in September 2010 to approve the use of its sanctuary and the participation of its clergy in gay weddings. A congregation-wide vote approved the policy 367-8 after four months of discernment and discussion. The decision to celebrate gay weddings came after the District of Columbia legalized gay marriage. It was the second Washington UMC congregation to take this step. Earlier in 2010, Dumbarton UMC also pledged to honor and celebrate same-sex weddings.  “As a pastor, I am called to extend care and grace to all people even as Jesus did,” says the Rev. Mary Kay Totty, Dumbarton’s appointed pastor. She and 11 other ordained clergy affiliated with Dumbarton are now available to marry gay and lesbian couples.

While MIND and MFSA were organizing and gathering signatures on A Covenant of Conscience before the project was publicly launched in October 2011, others across the UMC took up the marriage initiative idea. In June 2011, a group of clergy members in the Minnesota Annual Conference released a statement announcing their decision to marry all couples “desiring Christian marriage.” When the announcement was made, during their annual conference meeting, there were 40 signers. By the end of the conference, there were 70. Read their statement here. In the weeks that followed, the marriage pledge idea spread like wildfire through a half dozen conferences. By the end of the month, almost 800 clergy in seven annual conferences had pledged to marry gay couples, and the new initiatives continued to spread. By August 2011, the number of conferences with marriage initiatives had grown to 11. As of  summer 2012, there were 14 annual conferences with over 1,100 clergy who have vowed to marry gay couples. 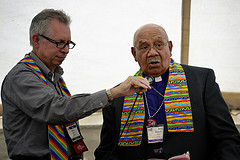 Bishop Melvin Talbert became the first bishop to publicly endorse the marriage initiative movement and gave it great encouragement with his remarks at the end of the 2012 General Conference, which was marked not only by the entrenchment of the existing discrimination but by hate language aimed at LGBT people. “The derogatory rules and restrictions in the Book of Discipline are immoral and unjust and no longer deserve our loyalty and obedience,” Talbert said at a marriage equality event organized by the Reconciling Ministries Network (RMN). “I call on the more than 1,100 clergy [who have signed marriage initiatives] to stand firm in their resolve to perform marriages for same-sex couples and to do so in the course of their normal pastoral duties.”

Talbert’s defiant words epitomized the growing crisis of authority that the UMC is facing in the wake of its continuing prejudice and discrimination. The extent of the crisis for the institution was further demonstrated by the spread of the resolution “The spiritual crisis caused by the requirement to discriminate,” which, while not actually calling for ecclesial disobedience, noted that clergy who feel “bound by conscience to offer the ministries and sacraments of the church to all persons on an equal basis” do so “in a way that is consistent with the long-standing principled declarations” of the conference. It further noted that those take punitive action against clergy for not discriminating do so “contrary to the historic expression” of the conference. First introduced by MIND in NYAC in 2012, the resolution was subsequently picked up and passed by the Pacific Northwest Annual and, significantly, the Northeast Jurisdictional Conference.

The spread of the marriage initiative idea is the latest development in the movement to extend marriage ministry  to gays and lesbians in the UMC, but other efforts date back to at least 1998. That year a network of retired clergy in the New England Annual Conference responded to their pastoral call to “seek peace, justice, and freedom for all people” by beginning to perform gay unions and marriages. They founded the Reconciling Retired Clergy of the New England Conference and declared their intention to officiate at gay unions; the founder of the group, Rev. Dr. Richard E. Harding, wrote to the New England bishop to inform her of the decision. By early 1999, they had 17 clergy who had signed a covenant signifying their willingness to perform same-sex ceremonies. The list has continued to grow, and topped 100 by the time of the group’s 10th anniversary.

Meanwhile, just as the New England retired clergy were organizing, a group of 68 clergy officiated at a lesbian holy union ceremony in Sacramento, CA in January 1999. Charges were brought against the 68, but were eventually dropped. The New England group signed on as “co-officiants in absentia” and the New York Annual Conference passed a resolution in support  of the California 68 at its 2000 annual conference session.

“I will not withhold ministry”

California has often been in the vanguard of social movements, and when San Francisco Mayor Gavin Newsom made marriage legal in the city in 2004, UMC pastor Rev. Karen Oliveto (who hails from the NYAC, BTW) joyfully responded to requests from parishioners to marry them. She presided over at least a dozen weddings in the brief time that marriage was legal in San Francisco. (It is now, of course, once again legal, following the Supreme Court decision in the Proposition 8 case.)

Oliveto is one of many individual clergy who have for years simply treated gay and straight couples equally and officiated at same-sex services in defiance of the Book of Discipline. Some, like Oliveto, Rev. Gregory Dell, Rev. Jimmy Creech and most recently Rev. Amy DeLong, have had a high profile and made public statements about their ministry to gay couples. Many others simply provide pastoral care to their flocks quietly. Dell, Creech and DeLong were brought to church trials for performing same-sex weddings. Dell was suspended for a year in March 1999, and Creech was defrocked in November of that same year.

It seemed like the church was determined to squash efforts by its clergy to honor their conscience rather than discriminate against their congregants. Creech said the “larger impact [of his trial] is that it says to clergy that they must support what is unjust and immoral in order to remain clergy. That is a scandal.”

But official UMC opposition and sanctions have not stopped the movement towards marriage equality, either in the church or in the society at large. Dell was told that his suspension would be lifted as soon as he agreed to stop marrying gay people. He refused — publicly — and instead issued a statement that said “I will not withhold a ministry from some which is available to others solely because of an unjust church law.”

DeLong’s trial, a dozen years later, had a different outcome. She received a 20-day suspension and an assignment to write a document on ways to address the harm done to the clergy covenant. The lightness of the penalty combined with the creativeness of the writing requirement were signs of  hope . What had happened in the intervening 12 years was growing acceptance of gay marriage in civil society, increasing legal and legislative victories for marriage equality and the refusal of prophetic leaders in the UMC to stop their ministry to LGBT people. The DeLong verdict came just as hundreds and hundreds of clergy were declaring their intention to do the same thing through the marriage initiative pledges that sprang up in June 2011.

But there has also been backlash. A group of 70 conservatives in the church sent a letter to the Council of Bishops demanding that Talbert be censured for his call to “biblical obedience.” They further demanded that other bishops who were present at the event repudiate Talbert or also be censured.

Joining the march towards freedom 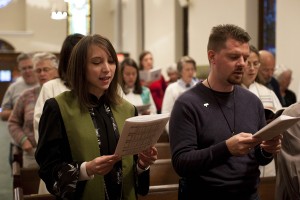 In civil society, marriage equality was initially catapulted to the top of the gay rights agenda in 1993 with an unexpected ruling from the Hawaii Supreme Court that held that marriage is a basic civil right and denying it to gay couples violated the state’s constitution. Since then, it has come to embody the very essence of the quest for equal rights for LGBT people. Love is a human right, and all that gay and lesbian people are seeking is equal rights under the law to recognize this most fundamental right. Marriage has now been legalized for gay people in 13 states and the District of Columbia. In 2012, for the first time ever, same-sex marriages were approved by popular vote in several states, and in 2013 the Supreme Court struck down the Defense of Marriage Act as a violation of the right to the equal protection of the laws.

The question for those of us in the church is will we be a part of this march towards freedom, or will we remain obstacles in the path towards freedom? At Foundry and Dumbarton and in the clergy networks of various annual conferences, the answer is clear. And in MIND, our answer is clear as well. A Covenant of  Conscience is a call to join the march towards freedom. With it, we proudly join the tradition of those in the church who have willingly and deliberately engaged in civil disobedience and ecclesial disobedience in an effort to end discrimination.

“One has a moral responsibility to disobey unjust laws,” Martin Luther King wrote from his jail cell in Birmingham in 1963. Those words, part of the famous Letter from Birmingham Jail, were addressed to eight clergymen who had criticized King’s use of civil disobedience. Two of them were Methodist bishops. The struggle to get the church to act in defense of the oppressed and the persecuted is not new, but it’s a struggle we must engage.