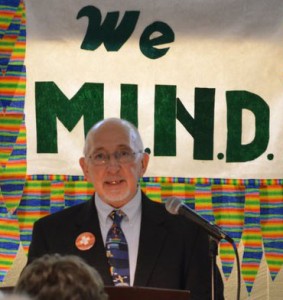 Rev. Gregory Dell, retired, is the former pastor of Broadway UMC in Chicago. He has a 50-year history of involvement in issues of social justice.  While still in high school, he participated in Dr. King’s march and efforts to challenge racism in Chicago neighborhoods.  As a student at Illinois Wesleyan University, he provided leadership in challenging racially restrictive policies at the school and in the community.  He graduated magna cum laude from Duke Divinity School in 1970, where he participated in the struggles of workers at the school to unionize.  Greg was ordained in 1968 and began serving churches in northern Illinois in 1970.

In 1999 Greg was subjected to a nationally publicized church trial resulting from charges filed against him by the church for conducting a service of holy union for two gay men from the congregation he served.  The result of that trial was a year-long suspension from pastoral duties.  Returning to Broadway after that year, Greg continued his activity as an ally in the struggles for racial, gender and sexual orientation justice. In 2010 he endorsed MIND’s Covenant of Conscience, urging his colleagues in NYAC to sign it. He was MIND’s featured speaker at the 2011 annual conference, where he gave a powerful, gut-wrenching speech that brouht home the damage done by religious homophobia and uderscored the urgency of our cause.

Greg is the recipient of a number of awards, including the Church Within A Church Gilbert H. Caldwell Justice Ministry award (2010), the Human Relations award from the city of Chicago (1999), and honorary doctorates from Illinois Wesleyan University (2000) and the Chicago Theological Seminary (2007).  He was inducted into the Chicago Gay and Lesbian Hall Of Fame in 2008.