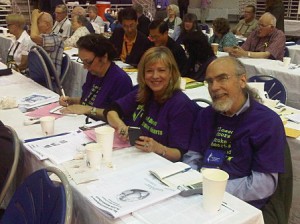 The New York Annual Conference (NYAC) meets annually to set policy. It is the one time every year that representatives from every congregation throughout the conference come together and is thus a crucial forum for our witness against the church’s ongoing exclusion of God’s LGBT children. This year we once again mounted a powerful, unavoidable witness.

Highlights included our featured guest, Rev. Gregory Dell, and the passage of a signature piece of legislation, Ministry to the Marginalized: Welcoming LGBT people into NYAC. As part of a broad coalition, we also passed a resolution on hate crimes, which builds on the work of the My Brother’s Keeper symposium on hate crimes we helped organize last fall. MIND was a co-sponsor on a series of petitions to the 2012 General Conference  repealing the language in various places that holds in place the ban on gay weddings. Other General Conference petitions abolishing the Incompatibility Clause and the ban on the ordination of lesbian and gay people also passed. In addition, for the seventh year in a row, we handed out over 1,000 armbands to clergy and guests at the ordination service, worn in solidarity with those who are called by God but rejected by the church. And we designated Friday as our t-shirt day, where we ask everyone at conference to wear the signature purple shirts to help create safe space within a hostile environment.

Text of Greg Dell’s remarks at the MIND lunch

Report from Wednesday: “Giving life the shape of justice”

Report from Thursday: Ministry to the Marginalized one step closer to reaching LGBT communities

Report from Friday: Ministry to the Marginalized passes!

Ministry to the Marginalized resolution

Greg Dell: “In Celebration of Intolerance”

Greg Dell, one of the heroes of our movement, gave a powerful and deeply moving talk to a standing-room only crowd at our lunch.  “We are called to be intolerant of intolerance,” he said, and told us the story of a 14-year-old boy who had sent him an email while Greg was on trial for marrying a gay couple in his congregation. The boy was gay, had been taught by church and family and everything around him that this was evil, had prayed and prayed in vain to be changed and had decided, finally, that there was no hope and  he should kill himself. On the afternoon that he planned to take his own life, he heard a radio interview with Greg, who said that the church was wrong to condemn homosexuality. “I thought this guy must be crazy,” the boy wrote. “But then I thought, what if he’s right?” The boy decided to wait, ”to see what the jury decided about you,” he told Greg. The jury, of course, convicted Greg. His voice cracking with emotion, Greg told the MIND lunch that he never heard from the boy again and doesn’t know what he did when he heard the verdict. He went on to say, “An institution that supplies a 14-year-old with reasons to doubt his own worth – to doubt that worth to the point of self-destruction, is guilty of complicity to commit murder….I believe I am called, in fact I believe all of us here are called to intolerance for that which is so destructive.”

Greg, along with Church Within A Church Executive Director Cathy Knight, spent several days with us at annual conference, and participated in two other events as well. On Thursday evening, Greg signed copies of Celebrating Life: Liturgy that Transforms, a worship resource produced by CWAC that brings together much of the inspiring liturgy that Greg has written over the years. And on Friday morning Greg celebrated holy communion at the COMPASS-sponsored sunrise service (the moving liturgy he used can be found in Celebrating Life).

Ministry to the Marginalized passes!

Hours after Greg’s speech at the MIND lunch, the conference passed our Ministry to the Marginalized resolution, after a two-year battle that went all the way to the Judicial Council in 2010. The resolution asks the conference, which has a 30-year record of inclusive legislation, to reach out to LGBT people and tell them what we have already resolved in their defense. Specifically, it requires the conference to take out ads in LGBT publications that explain, “we do not share our denomination’s belief that ‘homosexuality is incompatible with Christian teaching’ and we are deeply sorry for the harm that this belief has caused. We are working within the UMC to change its prejudiced policies.” More than one person in the room had the 14-year-old boy that wrote to Greg Dell on their mind as we took this groundbreaking vote.