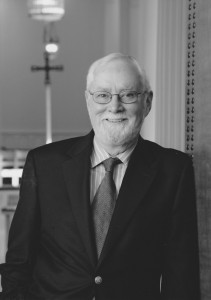 Rev. Dr. Thomas W. Ogletree is a United Methodist clergyman and a distinguished scholar of theological ethics and Christian social ethics. His lived commitment to social justice stretches back more than five decades to his involvement in the Civil Rights Movement.

Ogletree taught as a theologian at Yale Divinity School before his retirement in 2009, and before that at Drew Theological Seminary, Vanderbilt Divinity School and Chicago Theological Seminary. He served terms as dean at both Yale and Drew and is a past president of the Society of Christian Ethics. He is the author of five scholarly books, most recently The World Calling: The Church’s Witness in Politics and Society (2004), and the editor or co-author of another three. Ogletree is the author of more than three dozen scholarly articles and has held editorial positions at a variety of publications, including the Journal of Religious Ethics. Ogletree holds a B.A. from Birmingham-Southern College, a B.D. from Garrett Theological Seminary and a Ph.D. from Vanderbilt University. He has also received honorary degrees from several universities.

His service to the United Methodist Church began in 1952, when he became a licensed local preacher. He was ordained as an elder in the North Alabama Conference in 1959, and has been a member of the New York Annual Conference since 1990. He held several pastoral positions from 1952 through 1964. Ogletree served as a member of the UMC’s Episcopal Committee on “Our Theological Task” and helped draft that section of the church’s Book of Discipline.

Ogletree’s career has been as distinguished by an inclusive vision of Christian ministry and a commitment to social holiness as it has by scholarly achievement. He was an active member of the Student Non-Violent Coordinating Committee while at Vanderbilt and was part of the lunch counter sit-in movement at that time, working together with John Lewis, Diane Nash (Fisk) and Jim Lawson, among others. He was equally involved in the Civil Rights Movement when he moved to Chicago, where he served in the leadership of Operation Breadbasket at the request of Jesse Jackson, who was a student of his.

He is a strong advocate for the full equality of LGBTQ people in civil society and in the United Methodist Church. In the fall of 2012, Ogletree officiated at the wedding of his son, a pastoral act for which he now faces charges in a church trial because of the UMC’s ban on same-sex weddings and ceremonies. He is a signer of Methodists in New Direction’s (MIND) Covenant of Conscience, a collective commitment by over 1,200 people in the New York Annual Conference to extend their ministries to all couples, gay and straight, on an equal basis.

Watch an excerpt of Tom Ogletree’s remarks to the 2013 MIND annual conference lunch.