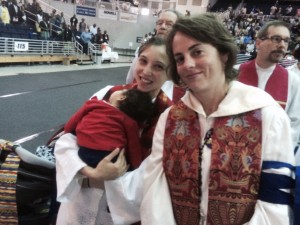 The New York Annual Conference (NYAC) meets annually to set policy. It is the one time every year that representatives from every congregation throughout the conference come together and is thus a crucial forum for our witness against the church’s ongoing exclusion of God’s LGBT children.

Report on Day 1: All eyes focused on General Conference elections

Report on Day 3: A covenant never to be silent again

Final wrap up: A holy and redeeming witness

Overall, what stands out about the 2014 annual conference is the level of support and respect MIND received. In the General and Jurisdictional Conference elections, all six of the lay candidates we endorsed were elected; six of the eight clergy candidates we endorsed were elected, including the head of the entire delegation who won a close race in which perhaps MIND’s support made the decisive difference. All of our resolutions were passed the “consent calendar” level, with a greater than 90% approval. Steering committee member Sara Thompson Tweedy was honored at the MFSA dinner, where her speech had the rapt attention of all those present. Hundreds attended the MIND lunch, where Frank Schaefer gave a moving speech. We had new clergy and lay signers of the Covenant of Conscience. And we had a presiding bishop wearing an armband at the ordination service.

None of this means our work is done – far from it – but it does mean the moment is right to mobilize and galvanize people across our conference to join in active participation in the sacred task of dismantling our denomination’s prejudice and discrimination against LGBTQ people.

MIND’s resolutions that were passed  at this year’s conference: